Unlike most of my peers, my favorite time of day as a child was bedtime. Well, at least it was when my maternal grandmother — who visited my family every other year from the time I was born to the time I left for college — was in town. From the minute she arrived at the airport, I would latch onto her like a tiny barnacle, pestering her with questions from sunup until she finally fell asleep at night, no doubt exhausted by a five-year-old girl with a seemingly unquenchable curiosity about everything.

There was one question to which, however, she never said no. “Ajji?” I’d ask her, my voice high and ever so slightly petulant as she brushed my hair and got me in my pajamas, “Can you tell me a story?”

“…before I even really knew what religion was, I was soaking up parts of the Mahabharata and the Ramayana.”

And she always did. Her repository of stories was seemingly endless, and she had a natural talent for making these tales accessible to a kindergartener without glossing over any moral nuances or situational complexities addressed therein. She drew upon her knowledge of Hindu epics to feed me bite-sized excerpts; exciting tales of kings at battle or goddesses who harnessed their rage to destroy evil. 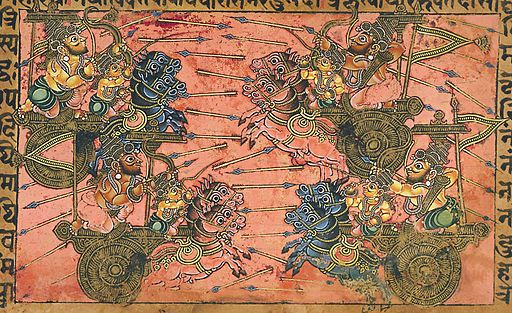 This is how, before I even really knew what religion was, I was soaking up parts of the Mahabharata and the Ramayana, getting my first primer to the Bhagavad Gita, and obtaining a solid foundation in the religion that would leave me conflicted for the next several years to come.

As I got older, I realized that Hinduism, and my relationship with it, would be a bit more complicated than I had previously thought. Well into puberty, I held fast to my tomboy-like tendencies; I far preferred to run around with the neighborhood kids, playing soccer and catching bullfrogs, to princesses or dress-up. I was incredulous, then, when I was stuffed into sequined lehengas, made to wear bejeweled bindis, and put flowers in my hair when visiting the temple or family friends’ houses.

When I protested, I was simply told that girls were akin to the goddess Lakshmi, and so it was expected that we dress like her to bring light into the home. It didn’t seem right that my discomfort — an alienation of my personal boundaries — was being justified via religion, but who was I to argue with a goddess? I kept my mouth shut, but even then, I knew something wasn’t sitting quite right with me.

“I kept my mouth shut, but even then, I knew something wasn’t sitting quite right with me.”

The older I got, the more serious my problems with the religion in which I was raised grew. My family got their first taste of my self-righteous indignation shortly after I started high school. A few times a week, my whole family would get together to sing bhajans. Before one of these gatherings, however, I was pulled aside and told politely that I was not to participate in the bhajan because I was menstruating and therefore unclean and not allowed to enter the prayer area.

A rage heretofore unknown to me filled my soul — how was I being made pariah in my own home? Why was I being punished for performing a normal bodily function? Why did my religion, one that claimed to profess love and acceptance, make me feel nothing but shame and sadness?

Even then, I knew that my anger at the women in my family was grossly misdirected. They were not subjecting me to anything that they had not experienced, or forcing me to grapple with issues that they had not grappled with as young women. They were merely perpetuating the only lifestyle they had ever known onto the next generation — one that had been thrust onto them, and every generation of women before them, as an unquestionable rule with hazy religious rationale. Religion had become the ultimate crutch for a patriarchal society — one where men made the rules and God enforced them.

“I carried my sense of disenfranchisement, and my ultimate disappointment with the religion of my family for many years.”

I carried my sense of disenfranchisement, and my ultimate disappointment with the religion of my family for many years. All through college I openly decried it, pointed out to anyone who would listen, it seemed, the misogyny I thought intrinsic to the practice of Hinduism.

Somewhere during this period I visited my grandmother, and as we were chatting, she asked me if I had been keeping up with my prayers and visiting the temple regularly while away at college. Though it seemed easier to lie and tell her that I was still pious, something stopped me — this woman, whom I had idolized since I was a toddler, deserved better. She deserved the truth.

I told her I had been struggling with my religion, with the idea of any sort of faith at all; in my view, it seemed to serve only as a way to oppress people, and enforce structures of power that turned people against each other. She thought about what I said for a minute, and then simply looked at me and said, “That’s okay. You love your family, your friends, and you want to help other people. That’s all God really wants you to do.”

“I went back to the Mahabarata, re-read the Gita, tried to make sense of the anger of my past.”

While I didn’t know it then, this simple sentiment made an indelible impression on me, and softened my view on Hinduism, and religion in general. I went back to the Mahabarata, re-read the Gita, tried to make sense of the anger of my past. While I found the seeds of what could be interpreted as misogyny in these texts, I also found guidelines on how to live a fulfilling life as an insignificant human living in a cruel and confusing world. These texts were not meant to oppress me, but to try and enlighten me. Religion was a tool that humans used to understand a world that hurt them for no reason; a lack of education and an imbalance of power made it an easy scapegoat for systematic societal oppression.

While I cannot say that I am pious, devout, or even religious, I do have a renewed respect and appreciation for the faith I was raised in. And if, one day, I ever do have children of my own, I hope to tell them the same bedtime stories my grandmother told me as a child. In my mind, that is where the true beauty of my Hinduism resides.

Rashmi is (almost) a pharmacologist living in the Metro D.C. area. Her interests include feminism, pop science, South Asian diasporic culture and media, and biryani. You can find her on twitter at @rashmiv11.